Desert Circuit III Goes Out with a Bang with the $350,000 HITS Thermal Grand Prix 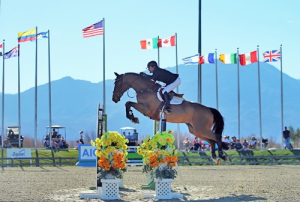 Thermal, CA (February 9, 2016): The crowd that gathered to witness the $350,000 HITS Thermal Grand Prix on Sunday of Desert Circuit Week III was in store for a spectacular display of equestrian sport. An electric atmosphere combined with supremely talented exhibitors, made for an excellent day for this top-dollar class with an exceptional ending.

Many big names filled the Order of Go, including Olympic Gold Medalist and five-time World Cup finalist, Will Simpson of Westlake Village, California, and Olympian and World Cup Finals champion Rich Fellers and Flexible, owned by Harry and Mollie Champion. It would be Los Angeles equestrian Chris Pratt, who has won over $150,000 in Week III of the HITS Desert Circuit alone, and owner Eddy Sepul’s stunning Dutch Warmblood gelding, Edesa’s Basantos, who would take home the well-deserved victory.

Eleven in the field produced clean rounds in the first-round of the featured class, to advance to the extremely exciting and competitive jump-off round. Eight would go double-clear, putting it all down to the fastest time to claim the title.

Paul Rohrbach, of Parker, Colorado, and Camerino, owned by Wells Bridge Farm, Inc., was the first to return to the ring for the jump-off. An unfortunate rail at B of the mid-course triple combination to a bending line coming towards the gate resulted in four faults as they crossed the timers in 47.388.

Next to vie for the title was Karl Cook, of Woodside, California, and Basimodo, owned by Signe Ostby. They put in the first clear round of the jump-off, clocking in at 42.972 seconds, and would keep the lead after Tiffany Sullivan and Christian Grey, owned by Haley Farms, LLC, followed with a four fault round in 45.825 seconds.

Will Simpson and E-Unanime De La Haie, owned by Monarch International, would contend for the win next to get the crowd on its feet with a sharp turn from the vertical to the second-to-last fence, shaving time off the clock and galloping to the last fence, finishing in a blazing fast, 42.081-second clear round—where the lead would remain until the last round.

Enrique Gonzalez and his own Chacna followed to put in clear round, but were too slow to take the lead from Simpson, in a 43.442-second round for sixth-place. Kristin Hardin and Firestone tried the course, but an unfortunate four faults at B in the combination resulted in four jumping faults.

2013 HITS Saugerties $1 Million Grand Prix winner, Nayel Nassar, riding out of Encinitas, California, and his own Lordan, came within just a fraction of a second of Simpson’s time, crossing the marker in a clear 42.425 seconds, which would ultimately earn him third-place.

Mandy Porter put in an impressive jump-off round, going double clear in 44.394 on Agro Star. It was the Porter’s second time to ever show the Little Valley Farms stallion, and the round would garner them seventh-place.

Tamie Phillips and her own Cat Balou joined the league of clear jump-off rounds, but were just shy of the top five with a 45.413-second round. Oxford Mills, Ontario’s Jill Henselwood and Farfelu Du Printemps, owned by John Madigan, would also go clear, but could not catch Simpson’s time as they crossed the timers in 43.244 seconds, ultimately earning fifth-place.

Last, but certainly not least, was Pratt and Edesa’s Basantos, entering the ring for one final shot at taking home the whopping $105,000 prize purse. They flew through the course, putting the pedal to the metal from the first fence to the second to shave off time, according the Pratt’s plan: “I watched Will Simpson go and I knew I could be faster between the first two jumps.I didn’t know if I could be faster the rest of the way, but I just stayed on it and kept going as fast as I could.”

As they galloped to the home-stretch vertical, every soul in the stands stood in anticipation, rooting on the pair as they soared to their victory—they clocked in at 41.140 seconds for the blue, putting Simpson in second-place, Nassar in third and Cook in fourth.

Edesa’s Basantos and Pratt also won the $50,000 Brook Ledge Open Welcome on Wednesday and were third in the $100,000 Purina Animal Nutrition Grand Prix on Friday, capping a great week for owner Eddy Sepul, who Pratt said he was grateful to for the ride.

“HITS does a great job of putting together the prize money and bringing in the sponsors,” said Pratt. “It was a tough enough course, I didn’t think there would be eleven horses clearing it. It shows that the field of riders in California can get ready for a course like that.”