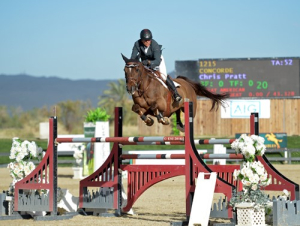 Course designer, Danny Foster of Ontario, Canada, set a demanding 17-effort 1.50 meter first-round course that included a technically difficult broken line involving a triple and double combination. Only four would manage to jump the first round fault-free to advance to the jump-off.

The jump-off began with a wide oxer coming towards the in-gate to a tight roll-back turn to a tall vertical, leading to a difficult combination. With its multiple roll-back turns, the shortened course also included places where riders could gallop to race the clock.

First to go in the jump-off was Mandy Porter of Encinitas, California, riding Ace of Hearts owned by Little Valley Farms. Knowing that she had three very talented riders to follow, Porter set a scorching pace right out of the gate, but  had two rails at the last two fences for an eight fault score and a time of 46.134 to finish in third.

Following Porter, was Jill Henselwood of Oxford Mills, Ontario, aboard Farfelu Du Printemps owned by John Madigan. Henselwood galloped into the HITS Grand Prix Stadium and performed the jump-off with precision, taking all the inside turns and making tight roll-backs to the next jump. She crossed the timers in a blazing time of 43.328 seconds, setting the Great American Time to Beat .

California native, Tiffany Sullivan, riding Christian Grey, owned by Haley Farms LLC, decided to opt out of competing in the jump-off round, automatically landing her the fourth-place prize.

Last to go was Pratt riding Concorde. Knowing that he needed to be fast and clear to beat Henselwood’s blazing time, they galloped at every chance they had and took  the inside turns without missing a beat. The pair crossed the markers for the win in a time of 42.018 seconds, shaving a full second off Henselwood’s time.

“Concorde is a talented young horse, it is nice to be able to compete in the same arena each week to get the results I have been getting, said Pratt. "I have a fantastic team: my grooms, my wife and myself. [That] would defiantly be a key factor to my success this circuit.”